Entrepreneurs and startup investors make bets on the future. That’s the nature of building startups. In order to do that well, you need to make correct predictions about which markets (and specific startup ideas) are going to be successful. It’s well-known that that’s difficult, but how hard is it really? A decade-old list of startup ideas by one of the most prolific entrepreneurial experts provides an interesting perspective.

While cleaning out an old stash of digital notes (something I highly recommend for inspiration purposes) I found a blog post that is almost exactly 10 years old. It was written in July 2008 by YCombinator founder Paul Graham and listed 30 areas in which the famous startup accelerator was seeking to invest. The list was meant as an inspiration for aspiring startup founders to pick an interesting market for their project. It’s a remarkable, very concrete snapshot of startup investor thinking at the time. And with the benefit of hindsight, it’s a fascinating illustration of how difficult it is even for startup gurus with an incredible breadth of experience to predict which markets will be relevant in the future.

10 years is a very long time in technology. For context, when this list was published, the iPhone had just been on the market for about a year, and Apple’s App Store had just been launched days earlier. So it’s not too surprising that the disruption through mobile apps is not yet a theme – the word “mobile” is mentioned exactly once in the whole post. AWS was just about two years old and just bearable for the earliest of adopters, so the future of cloud computing was still unclear. Social networking was still a relatively minor industry, with Facebook just having about 100 million users at the time and Twitter just about a year old.

A decade is also a very relevant timespan in the startup world because it’s the default lifetime of most venture capital funds. VCs are trying to make investment decisions early in their funds’ 10-year lifecycle that should pan out within 5-10 years, so being able to pick interesting markets (and of course the startups the VCs hope will be successful in those markets) is key for a VC firm’s success. And, as we will see in this example, it’s incredibly hard, which is of course the reason why venture capital as an asset class rarely performs better than the stock market.

A decade is also a time horizon startup founders should carefully consider for their own life plans. An old word of wisdom in startup circles says that if you’re not willing to deal with a particular topic for at least 10 years, you really shouldn’t start a company in that field. Most startups take way longer than you think to develop, so picking a promising market (and one you like as a founder) is essential. Of course, most startups pivot during their lifetime, many even several times. But it’s rare that a startup can survive a transition into a very different market. Founders will tweak their products, target segments and business models, but they will typically stay in the same general market, so choose wisely.

To compare YCombinators’s predictions with what has really happened over the past ten years, I took a list of current and recently exited unicorn startups with a valuation of over $1 billion as a proxy for successful markets for startups. That’s of course incomplete, but since VCs are typically shooting for these kinds of outsized hits (and most founders wouldn’t mind having a billion-dollar startup either) it’s probably as good a list as any. I also took the liberty of simplifying and modernizing some of the terms of the original blog post to make it easier to digest for an audience in 2018. Once again, this comparison is not meant to grade YCombinator’s predictions, it’s just a great example to illustrate the overall point.

The details are listed at the end of this post. But as an overview, out of 30 market ideas, just 11 panned out about as expected, producing large, successful startups (not nearly all of them through YCombinator of course). Four of those ideas are closely related to the overall trend towards SaaS and cloud computing, which, while early, was already very clearly visible in 2008. Not surprisingly, extrapolating current trends is typically easiest. But there were also topics that were still nascent in 2008 that turned into major waves, such as online learning. 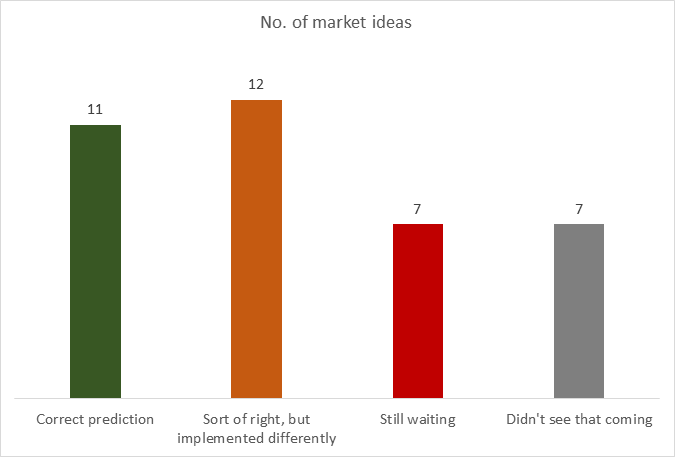 A next category are market ideas that found some success, but in different ways than expected. This includes categories that are now dominated by large corporations (such as web-based office apps, which are fully controlled by Google and Microsoft), as well as topics that saw some progress without real breakthroughs (new payment methods are an example). 12 of the 30 ideas can be categorized as somewhat successful, but implemented differently than expected.

The third category are ideas that have yet to come to fruition. 7 ideas fell into this bucket. We are all still waiting for somebody who solves the problem of e-mail overload or fixes digital advertising.

Finally, I added another category of 7 markets that were not on the list of 30 ideas, but turned out to have a very major impact on the past decade in startup creation. This includes ride sharing services, direct-to-consumer startups and messaging technology. Who would have predicted that a simple messaging solution like WhatsApp could be a $19 billion exit? This list could be extended with many other niches, but these seemed to be the most important ones.

Again, this list is of course only one view of the 2008 market of ideas, but it’s commendable that YCombinator was so transparent about its thinking, while most VCs only publish a very vague “investment thesis”, if anything at all.

There are a few important lessons that can be learned from this analysis:

Bottom line: Reviewing your own or other people’s predictions after a while is a very healthy exercise because it helps you understand biases and blind spots in predictions.

Here are the details per category:

Here are the fields that YCombinator found interesting and where we have seen successful startups:

Sort of right, but implemented in a different way

There were topics in the list that have manifested themselves as significant markets, but in a quite different way than anticipated.

The following are markets that YCombinator liked that didn’t develop as hoped:

There are markets that produced unicorns but never appeared on YCombinator’s list (and presumably not on most people’s at the time). I’ll leave out outliers such as SpaceX, Magic Leap or Palantir and will just mention categories that produced several noteworthy startups: 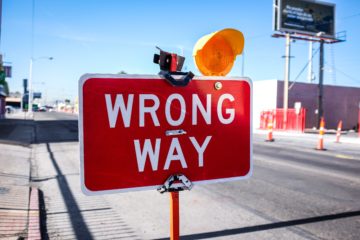