How do you recognize truly disruptive technologies that will change the world? This question keeps entrepreneurs and startup investors up at night.

Is hype a good predictor? As it turns out, much of the time it’s not, even when it’s turned up to 11.

One of my favorite examples is the Segway Human Transporter. I vividly remember how it was announced in 2001. The press was in full-on hype mode. Jeff Bezos was on TV saying that this was going to revolutionize transportation forever. Steve Jobs speculated that cities would be built around it. Everybody was excited.

What did the Segway have to justify the hype?

– A clear need to disrupt an inefficient incumbent system? Check.

– Some of the smartest people in the world saying that this will change everything? Check.

(BTW, if this sounds to you like a list that could be applied to some currently hyped technologies, you’re not wrong.)

So why did the Segway end up as a niche product for mall cops and lazy tourist groups? Why did it ultimately fail (it was discontinued in 2020)?

The answer might be found in its indirect successor that was much more successful, over 15 years later: electric scooters.

E-scooters are much simpler and cheaper than a Segway — no fancy self-balancing wheels. They are easy to use and don’t require a learning curve. The business model is entirely different. They are mostly rented, not bought, so most people don’t care about the costs of buying the device. In an adjacent market segment, e-bikes have emerged as the solution for longer rides. Apparently there’s not one single e-mobility device that fits all needs, and segmentation matters.

Ultimately, the Segway was a pioneering product that helped spark today’s e-mobility wave. The general idea and some of the technology turned out to be useful, just in a very different way than imagined by all those smart people. And while e-scooters and e-bikes are amazing, it would probably be a huge exaggeration to say that they completely changed how we’re moving around. Useful? Definitely. World-changing? Hardly.

The history of technology is littered with overhyped ideas that ended up failing or achieving far more modest outcomes than expected.

But is hype necessary for a truly world-changing technology? In many cases, it seems so. The PC, the Web, the iPhone and social media had plenty of hype and mostly lived up to it. But there are counterexamples too. Email, WiFi, digital cameras and video streaming were never hyped all that much and yet have disrupted entire industries and changed behavior patterns fundamentally.

Bottom line: Hype is useful for the adoption of new technology, but it’s by far not a certain predictor of success. Sometimes very smart people can be very wrong. 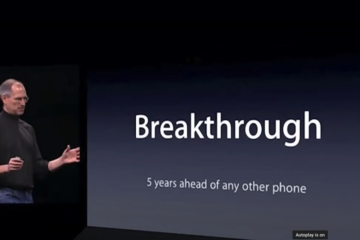 What we can learn from the iPhone’s success

On this day 15 years ago, Apple announced the iPhone. It’s worth watching the entire video of the event. It’s a masterclass in how to announce a product and how to do a brilliant demo. Read more…

Web3 is not the first attempt at radical decentralization

I find the current heated discussion around Web3 quite fascinating. What I think is an overlooked factor is how Web 1.0 and Web 2.0 started out and how they developed over time. That could give Read more…